Wishing a very happy 90th birthday to the incomparable John Williams! Composer, conductor, winner of five Academy Awards (and 52 nominations) and 25 Grammy awards (and 72 nominations), he has given us several of the most popular movie soundtracks in the history of cinema.

When Williams became the first composer to be awarded the American Film Institute‘s lifetime achievement award in 2016, his longtime collaborator Steven Spielberg said, “Without John Williams, bikes don’t really fly, nor do brooms in Quidditch matches, nor do men in red capes. There is no Force, dinosaurs do not walk the Earth, we do not wonder, we do not weep, we do not believe.” 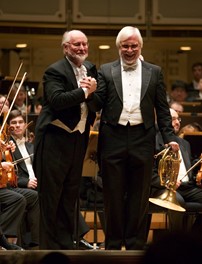 Erich Kunzel first led the Chicago Symphony Orchestra in Williams’ music — selections from Star Wars: Episode IV–A New Hope — at the Ravinia Festival on August 13, 1978. Williams himself first guest conducted the Orchestra at Ravinia on July 31, 1994, and at Orchestra Hall on November 28, 29 and December 2, 2003. During that first downtown residency on November 29, he led the Orchestra in the world premiere of his Concerto for Horn and Orchestra, dedicated to Principal Horn Dale Clevenger and commissioned by the Edward F. Schmidt Family Commissioning Fund for the Chicago Symphony Orchestra.

Also, the Chicago Symphony Orchestra has performed the complete soundtracks to accompany screenings of multiple movies scored by Williams, including E.T. the Extra-Terrestrial, Home Alone, Jaws, Raiders of the Lost Ark, and several films in the Harry Potter and Star Wars franchises. Most recently, Williams led the Orchestra on April 26 27, 28, and 29, 2018, conducting excerpts from BFG, Hook, Jaws, Lincoln, Raiders of the Lost Ark, Superman, and selections from movies in the Star Wars trilogies.

Under the baton of the composer, the Orchestra recorded a suite from Memoirs of a Geisha in August 2008, with Yo-Yo Ma as soloist. In May 2012, Williams led the Orchestra and the Chicago Symphony Chorus in sessions for the soundtrack for Lincoln, later nominated for a Grammy Award for Best Score Soundtrack for Visual Media and an Academy Award for Best Original Score.

Star Wars: Return of the Jedi in Concert